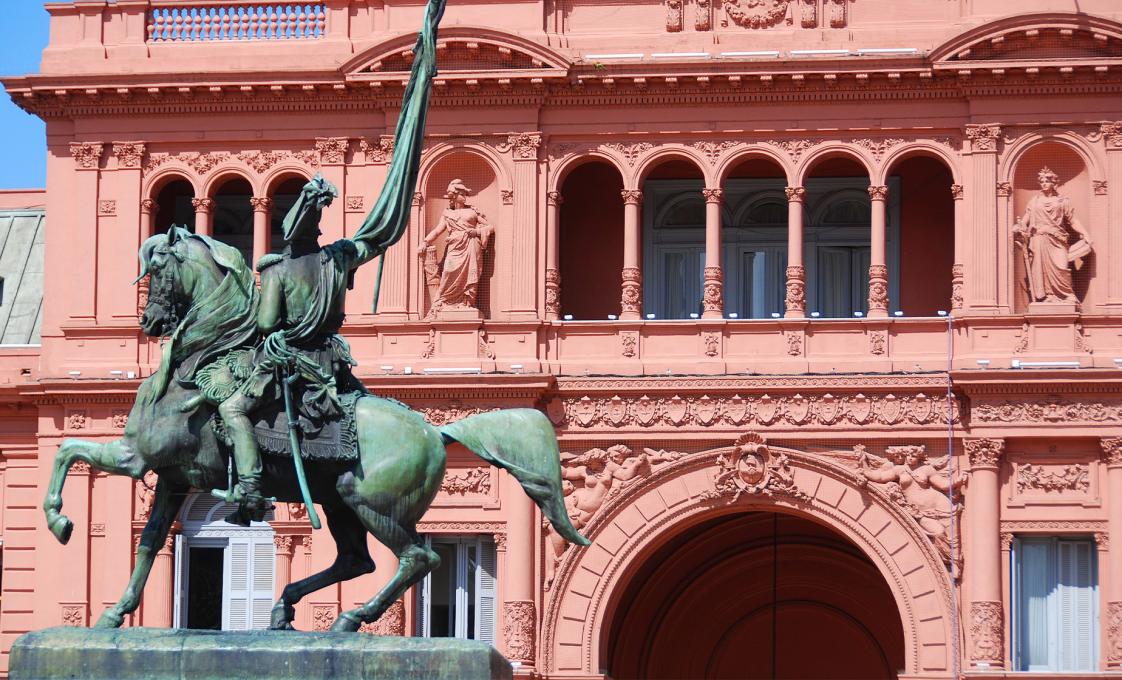 Explore Buenos Aires on a private tour and discover why this stunning city is known as "The Paris of South America." Experience the best of Buenos Aires like a VIP.

Skip the crowds on this private tour of Buenos Aires. Your scenic half day tour of Argentina's capital showcases the city's spacious parks, fashionable shops, and famed architecture. Only your select guests and a knowledgeable tour guide will accompany you on this adventure. From motoring by the vibrant Caminito street museum in the renowned La Boca barrio, where the first Italian immigrants settled in 1851, to driving along the the world's widest boulevard, the city's Latin flavor and European structural influences will absolutely amaze you.

Buenos Aires is the most popular travel destination in South America. After visiting these must see tour sites, you will know why. Plaza de Mayo is the heart of this capital city and the site of the May 25, 1810 revolution, which led to Argentina's independence. It's now the country's political hub, bordered by La Casa Rosada, a baby pink building, and office of the Argentine President.

Equally astounding is the 19th-century Neoclassical facade of the Metropolitan Cathedral (housing the Mausoleum of General San Martin, the primary leader responsible for Argentina's independence) and the regal Cabildo (the Colonial Town Hall). These sights will remind you of a European capital enhanced by Argentine style. Then there's the giant Obelisk of Buenos Aires, a National Historic Monument marking 100 years of government. This impressive structure is surrounded by an LED light district reminiscent of New York City's Times Square. The Buenos Aires entertainment industry movers and shakers can be seen there.

Speaking of entertainment, no visit to Buenos Aries is complete without visiting the tomb of the remarkable political leader Eva (Evita) Peron at the La Recoleta Cemetery. And for the grand finale, you'll continue driving through the glamorous Recoleta Quarter, home of Buenos Aires's exclusive shops, art galleries, and restaurants prior to returning to the ship.

Buenos Aires is a cultural South American mecca; it has the highest concentration of theaters in the world. For first time visitors, this Buenos Aires tour is a total delight. Bring an appetite for adventure, and the optional camera, on this comprehensive and convenient private tour of Argentina's magnificent metropolis.

We are experts in providing exceptional shore excursions. We understand that in today's fast paced world, vacations have become an increasingly important way to relax, reconnect with family and friends, and experience new and interesting places. With this in mind, we provide the highest quality tours by performing extensive research, and detailed reviews. While other companies also offer excursions, we strongly believe our expertise and approach set us apart. The large cruise lines sell shore excursions - typically in very large groups visiting high traffic sites. We focus on smaller groups visiting more interesting and authentic locations using more personalized local operators. While the cruise lines are experts in delivering cruises, we are experts in delivering shore excursions.

Our Approach
We believe quality service is not only highly valued by customers, but ultimately leads to better experiences and higher satisfaction. Unlike the cruise lines and other tour companies that rely almost entirely on websites, we encourage customers to call us. We want to invest our time answering your questions, providing input, and selecting the excursions that best meet your needs.

Our Tours
Our goal is to provide customers a wide array of exciting, appealing, and enriching tours. For those customers who prefer to travel in smaller groups with more personalized service, we offer a wide variety of small group tours around the world. These tours generally range in size from 2-12 people compared to larger tours which can number up to 50 people. While exploring the destinations and ports on this website, feel free to search for these "Small Group Tours". For those customers interested in private tours, we offer many outstanding excursions that allow you to travel with your party alone and, in many cases, to fully customize your tour. Search for "Private Tours" if you are interested in this experience. Our "Scenic" tours provide up close and personal access to some of the most spectacular natural environments on Earth from majestic glaciers in Alaska to spectacular reefs in the Caribbean. Our "Cultural" tours allow customers to experience local customs, entertainment and culinary delights ranging from tribal dances in Alaska to an outstanding local meal in Santorini, Greece. Our "Active" tours offer a multitude of exciting and adventurous ways to experience our destinations. Our customers can kayak the turquoise waters of the Caribbean, hike to a spectacular waterfall in Hawaii, or bicycle through quaint villages in France. Our "City" tours allow travelers to see the highlights of great cities around the world with unique insights provided by our expert tour guides.

Our People
In our experience, exceptional travel experiences are almost always delivered by exceptional people. With that in mind, we utilize a comprehensive approach to select and employ the leading tour guides and tour providers around the globe. We hold our people to very high standards which we measure by our comprehensive Quality Control process and, most importantly, by our customer feedback, which we will actively seek from each of our customers.

Our Owners
Shore Excursions Group is owned by seasoned travel executives possessing extensive experience across many sectors within the travel industry.

Michael Bonner
Mr. Bonner has over a decade of experience working in the cruise industry in a variety of roles for both Royal Caribbean Cruises Ltd. and Viking River Cruises. Most recently, Mr. Bonner was the Chief Operating Officer for The Scholar Ship, a Royal Caribbean program aimed at providing college students onboard educational programs in conjunction with enriching shore excursions around the world. Mr. Bonner also helped co-manage Viking River Cruises U.S. Operations, and he ran the corporate, strategic, and deployment planning functions at Royal Caribbean. While at Royal Caribbean, Mr. Bonner was responsible for forming Royal Celebrity Tours, Royal Caribbean's land-based tour operation in Alaska, which takes cruise passengers on multiple day tours through the interior of Alaska either before or after their cruises. Prior to working at Royal Caribbean, Mr. Bonner was a consultant for Booz Allen & Hamilton.
Less
from $23.00 (USD)
Per Person
Contact Us
Tour Type
Private
Group Size
Private
Activity Type(s)
Cultural, Scenic
Tour Duration
4 Hours
Activity Level
Easy
Tour Leaves From
Cruise Ship Pier
Food/Beverage Provided
Not Included
Special Instructions
Comfortable lightweight seasonal clothing and walking shoes are recommended. Guests should bring sunscreen and a hat. A light sweater may be needed for the winter months in the evenings. Good quality sunglasses are advised, and photo-chromatic lenses for those who wear spectacles. If you plan on entering the Cathedral, shoulders and knees must be covered.
Restrictions
Participants must be able to get in and out of the vehicle. This tour can accommodate a foldable wheelchair.
Terms & Disclaimers